At All Out Africa, we believe that we offer “Adventures that change lives.” We believe that this motto extends to the lives of the volunteers that contribute their time to our social and conservation projects. Mark Willson supports our claim.

Mark was a volunteer in Tofo Mozambique on our Marine Research & Whale Shark conservation project in 2012, he says:

“Volunteers come from far and wide to take part in the All Out Africa marine conservation program here in Tofu and most stay for one or two months.  As well as the marine program volunteers learn about the people and culture of Mozambique.  Whether they are recording dolphin sightings and numbers, conducting a reef fish survey or recording data on manta rays and whale shark the volunteers are involved and engaged every day.  I have no doubt all those taking part will leave better for the experience. They will leave with enough knowledge and motivation to do something to help the ocean and pass some of that on to those in their circle.  It feels right and fulfilling to be a part of it. “

He has taken his experience and transformed it into a memoir about his underwater adventure that started with All Out Africa and carried on to other corners of the world. We are so happy to announce his book’s release that is now available on amazon.com.

Here is an excerpt from his book, we wish him all the best and hope that his adventures continue! 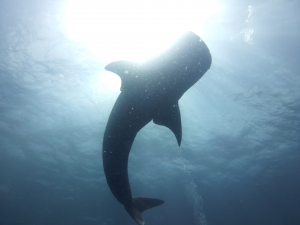 Screaming into my ear over the terrifying cacophony Jenn asks, “are we going to die?”

I truly believe we are, as I’m sure she does too. I look into her eyes momentarily and see my fear reflected back, I want to be strong, I want to be positive; but I rather feebly answer, “I hope not.”

Petrified and cowered in the corner of the room with the storm raging all around and with what can only be described as buckets of seawater being thrown into my face, I close my stinging eyes, try to block out Irma’s terrifying two hundred mile per hour howl and think, how did I get here?

Irma: Life Lessons from the Worst Storm in Atlantic History is a captivating tale of how all of us can transform a life without direction into one full of passion, determination, drive and hard work. When Mark finds the ocean, marine biology, conservation and particularly sharks he is finally motivated, has a purpose and a goal. But the road to the goal is a long one, and at times proves much more difficult than expected; nonetheless he remains undeterred and stays focused. Then Irma strikes and reaches beyond the day and to his very core. Issues of the past resurface; or have they always been there, guiding and misguiding him? It seems escaping Irma’s grip and that of past indiscretions is impossible and once again the point of life itself is questioned.

Days begin early in Mozambique, and Tofo is certainly no exception. Life here is dictated by the rising and setting of the sun and the rhythm of the ocean.  Sunrise is around five and just a little later the chatter of children will wake you as they pass on their long walk to school in the relative cool of the early hours. Meanwhile keen fisherman will be preparing their nets and their small traditional wooden boats and launching them together into the early morning surf.  The market begins to stir around seven when traders arrive and start setting out their stalls, including my favourites, the smiling faces of the ladies in the fruit and vegetable market.

The world famous Manta Reef lures divers from all over the world where dazzling schools of fusiliers, shimmering schools of snappers, and lazy schools of red tooth triggerfish suddenly part and a manta is right there effortlessly gliding by. You can scan the water as vigilantly as you like, but often a manta will still surprise you. As it moves its huge triangular wings independently it displays some of the most wonderful shapes of any creature in nature and you can’t take your eyes off it.  Then you look into its eye and cannot help but feel a connection. It is as if it knows, it is intelligent, somehow it speaks. However satisfying and enriching a dive with mantas might be you are always left wanting more. Back on the boat and as soon as the initial buzz of excited and lively chatter of the volunteers is over, everyone wants to get straight back in the water and do it all over again.

Reggies dive site is far from land and here you can fully appreciate the calm, blue, still silence of the Indian Ocean. You want to stay at sea and never return, to be adrift forever in the perfect expanse of blue.  We roll from the boat in unison into the warm, clear blue world, we soon find the somewhat resident; lazy leopard shark and of course a wealth of reef fish, including butterfly fish, angelfish, large schools of banner fish, plenty of parrot fish, and numerous big potato cod.  Then I see it.  A whale shark is swimming just below the surface, and from this perspective it is in perfect silhouette as yet without form or texture. As we rise together in the water column the shark takes on more form and complexity.   Until soon we are alongside it and can see its patterns, its broad flat head, its huge fins and slowly fluttering gill slits as it undulates with the surface chop. We spend almost half an hour with the most obliging whale shark I have ever seen as it seems to frolic in our exhaled air bubbles.

When the megafauna don’t put in an appearance you can fully appreciate the wealth of life on offer at Tofo. Moray eels, big potato cod, schooling jacks, all the wonderfully colourful reef fish, and some cryptic species too, frogfish, ghost pipe fish, leaf fish, and the absolutely incredible weedy scorpion fish to name but a few. The uncertainty and dynamic nature of the Indian Ocean makes every single dive day at Tofo seem like new and I leap from my bed in anticipation every morning.  I feel at one with the ocean and want to melt into her. I imagine my molecules merging with hers and remaining forever in her warm blue splendor. The ocean’s calming all encompassing embrace consumes me, there is nothing else when underwater, the water is the world; the world is the water. At the end of the day I often don’t shower, to do so feels like a betrayal.

If you would like to have your own your adventure in Mozambique, please email bookings@alloutafrica.com