Sometimes life is just too beautiful; you can’t quite believe it is real, it is almost a dream. Days on the water at All Out Africa Marine Research Centre are often like this. And no matter how long some of us stay here, there is always something new in the ocean amaze and surprise us.

On a sunny calm day in Tofo, Mozambique with two boats of volunteers, researchers and tourists we set off looking for sharks. The ocean was calm, the sun shining and the water warm…..already a perfect start. But the ocean is a very very big place, not just horizontally but vertically too resulting in huge volumes of space in which even the very largest shark in our ocean can manage to hide. 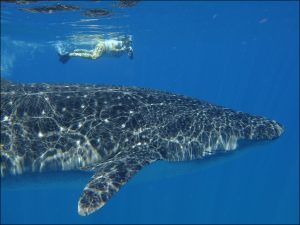 Researcher Volunteer Ankie, getting up close and personal with a Whale Shark

Leaving the shore behind we headed around the point of land protruding into the sea and began our search pattern in one of the most reliable areas of year-round whale shark occurrence on earth. But that said, we don’t find them every trip; this is the wild, not the zoo, which makes encounters less than certain, but all the more exciting. When we find and swim with animals in the ocean then they have the choice of whether to swim alongside you or not; both human and animal are choosing to be there.

After almost an hour on the water we spotted a shark! Small for this area at only around 4m in length, the whale shark can grow up to 20m and is the biggest fish in our ocean! Even this relatively little guy was easily half the length of our boat. Initially dropping into the water we noticed he was swimming through an area full of plankton resulting in bad visibility and not the best identification (ID) shots. Whale sharks have spot and stripe patterns which are as unique as your fingerprints and by taking clear images of their flanks we can work out which shark we have seen and, over time, track if, where and when we re-sight these individuals. 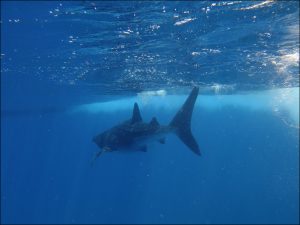 Checking out a boat propeller which had left a bubble trail.

Next time we got in the shark had swam to a considerably clearer less plankton-rich area and reduced in speed, resulting in fantastically clear ID shots and a great hour long swim alongside him! In fact, staying in the water with him while others got in and out, after a while some patterns in his behaviour started to emerge…..

As the boat approached he often chose to dive down for a short time, rising back up slowly once the boat had stopped. This makes sense as around the world myself and other whale sharks scientists are recording more and more injuries from boat propellers. If you want to stay in one piece then it makes sense to avoid large loud objects at the surface.
At the surface he started approaching some swimmers! Looping around in circles he was sometimes following them more than they were following him!! 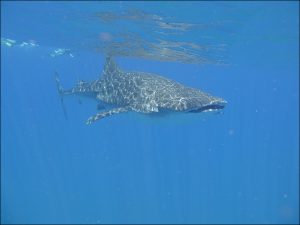 Coming over to see what’s going on…

Occasionally he would swim away towards another boat and, staying and watching him through the unusually clear water I noticed he seemed to be swimming towards the bubble-trails created by the engines of the boats! In fact a couple of times he seemed to almost bunch up and jump like an excited puppy, launching himself through the water mouth-open into the stream of tiny bubbles created by the propellers and left hanging for a few moments near the surface. He was chasing bubbles!! 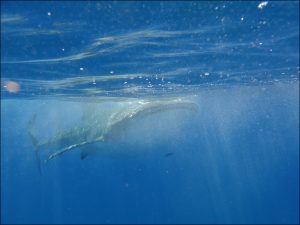 Heading towards some bubbles!

To test this I swam in the water off to the side of him, sometimes swimming normally, and sometimes twisting my fin to create bubbles…..every time I did this in his line of view he turned and started swimming towards me! Which then resulted in a hasty change to get out of the way of him as he used his mouth, evolved for filtering tiny zooplankton animals from the water column, to test my bubble for potential food.
This was the first time I had ever seen a whale shark chasing bubbles and been able to test the theory. After an amazing day on the water the AOA marine volunteers and I were able to return to the lab, upload the successful ID shots we had worked together to take and name this bubble-loving little guy as Whale shark MZ-688, a brand new shark to the global whale shark database! 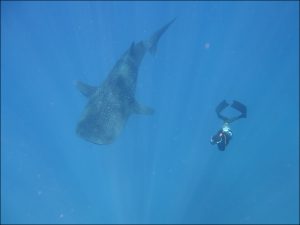 sometimes Whale Sharks go up and down in the water column, we call it parabola diving.

As we change the oceans, so whale sharks need to adapt to the changes – our bubbles aren’t food and boat propellers can result in catastrophic injuries. The more we can discover about the biology and behaviour of the charismatic and enigmatic species the more we are able to protect them, preserve the areas important to their life history and manage sustainable interactions with them working towards ensuring their future. If you would like to help us, our All Out Africa Marine Research Centre door is always open….because we don’t have one!!

My Tweets
Teacher training: kicking off 2017!

Finally, back in the ocean!
Scroll to top